In Her Majesty's Name

So something a bit different - we played a modified version of In Her Majesty's Name - Steampunk rules in the Victorian era. The scenario involved the Sons of The Desert raiding the compound of the Cunning Artificers to retrieve a precious Gemstone, stolen for its energetic properties?
I was on the side of the Sons of the Desert on the raid alongside Dan (also umpiring), Jon took the Artificers and Alex took the Police.
Immediately I messed the raid up, I should have prepared and perfected my position whilst I waited for Dan to move up but I didn't realise how far back he was, I also saw multiple long range weapons on my data list so thought I could shoot my way in (against Engineers in buildings :( ).

The sentry was taken out but crossing the courtyard I was faced by the unfortunate prospect of a machine gun in a mechanised beast. And with the ringing out of a shot the rozzers were on their way.
On my flank, this lead to a brutal melee, with my Hollow Guard felling many coppers being succumbing to his wounds.
Dan had the time and space to summon a Djinn, who made an impression on the police ("Just one Day from retirement").
After the melee, the remnants of my force fled but he was caught and chopped down by the Artificer's Iron Giant. (No pictures I'm afraid as its a very impressive miniature).
After this I unfortunately had to call it a night leaving Dan to fend for himself but I found the rules to be a good variation to our usual more serious ventures.

Elsewhere there was the usual Bloodbowl games as well as a WW1 dreadnoughts game. Again I'll leave it to others to comment.
Posted by North West Nerd at 10:38 No comments:

Late 1943 and 94th (Saxon) Infantry Division are dug in expecting an onslaught. Through the snow, diesel engines are rumbling and tank tracks start to clank. A Soviet Tank Corps is on the move!
The scenario pitted a significantly understrength German Infantry Division (Myself and Fran) against a nearly full strength Soviet Tank Corps (Alex, Ian and Jon) in late 1943. Snow was on the ground, the rivers were frozen so that all units could cross anyway barring Heavy Armour (e.g KV-1s). We used the Spearkrieg amalgamation rules (because they work) and the scenario (and bulk of the figures) was provided by Alex (and Pendraken).

94th Division was deployed with 2 Regiments up, 1 in reserve. (See Stalingrad TOE). The only hidden deployment was the hidden location of our limited anti-tank guns as well as the garrison strengths of the front line villages. We were promised that a Panzer Division would be sent to assist.
The Soviets initially deployed 3 Tank Brigades, no subtlety involved, just try and overpower the German defenders.

I'd like to say that my viewpoint was very focussed on the German right so I'm going to concentrate on the actions there - hopefully Ian, Jon or Fran can describe what happened on the left.

The surprisingly high Soviet Command Values led to rapid advances and early pressure appeared to be applied along the line. But in some ways the lack of Anti-Tank Guns an vehicles meant that actually the Soviets couldn't actually see there opponents whilst the German could call in Artillery, Mortars and Anti Infantry Guns with surprisingly good effects.
Around Turn 4 the line was still holding (still no Panzers) when a message was sent to Divisional HQ from OKW, Advance! (This is based on a Spearhead scenario and a historical event). At this point I remember Fran "bravely" ordering his Engineers to leave their trenches and flme the tanks in front of them - taking out a couple of platoons (but leaving themselves horrendously exposed).
Finally the ongoing tank fire was to much for my 1st battalion and they retreated - abandoning their positions and leaving a hole in the lines - it would have been interesting if we'd have had a couple more turns to see if the Soviets could have exploited this. Instead the towns were assaulted again and again, and again and again and eventually despite throwing back multiple assaults, the engineers fell and Jons infantry was able ot seize the village. All in all a great game and an interesting scenario, it just goers to show that combined arms works and if you fire enough of it, even tanks are susceptible. Thanks Alex.
Other games included Bloodbowl, a Crusaders game (sorry don't know ruleset) and a Vietnam Force on Force Game.

Cheers JR
Posted by North West Nerd at 06:26 No comments:

Last tuesday, I was introduced to "Muskets and Tomahawks". Now 28mm generally isn't my thing (with rare exception to the Lord of The Rings Skirmish rules or variants) the majority of my models are 6mm or 10mm. 28mm is for skirmishing or RPGs. But . . . I was really pleasantly surprised by these rules. 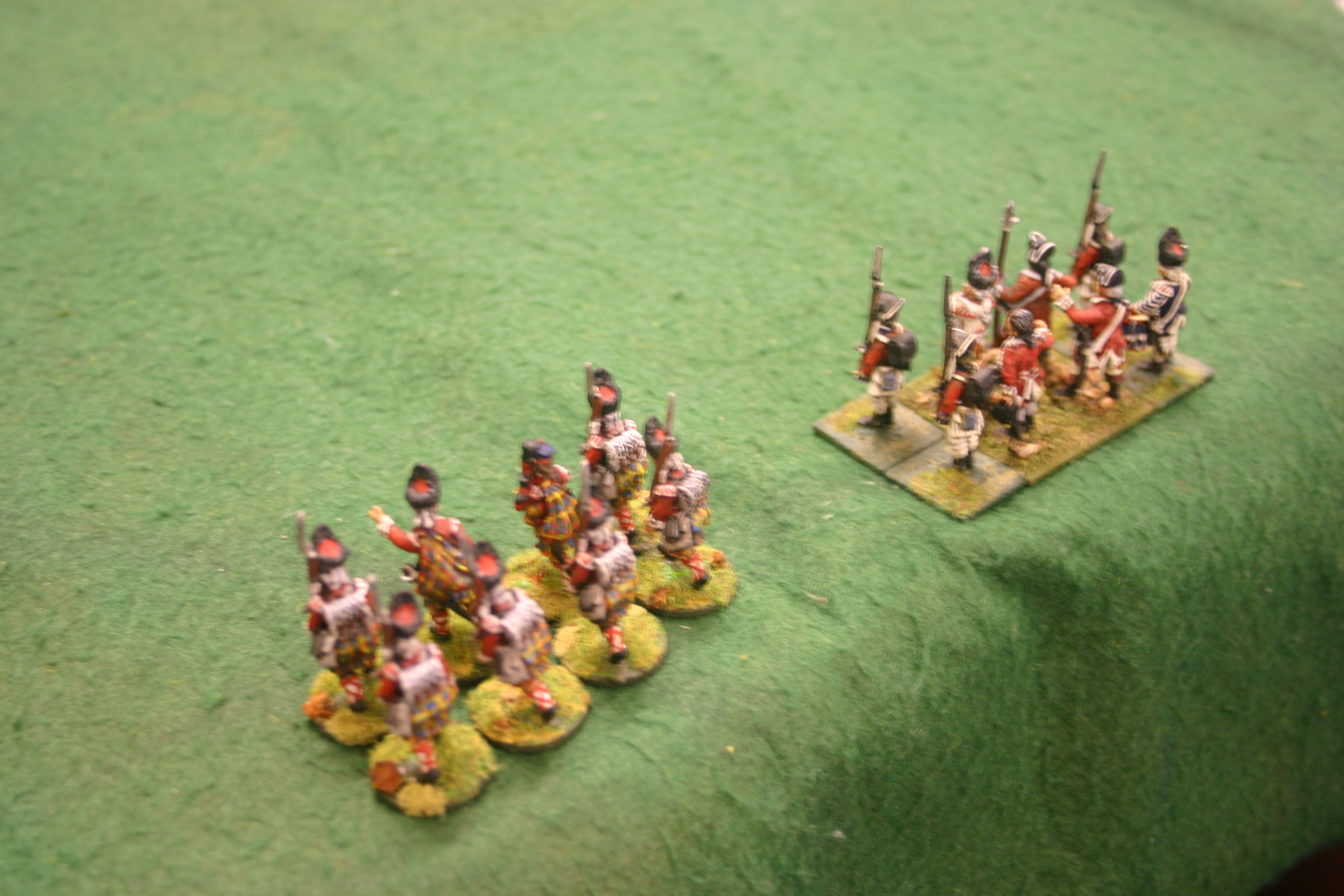 Each unit has there unique stats (enough variability to maximise flavour whilst simple enough to keep the flow of the game) and the turn is ordered by a number of cards within the deck to randomise the order of movement). 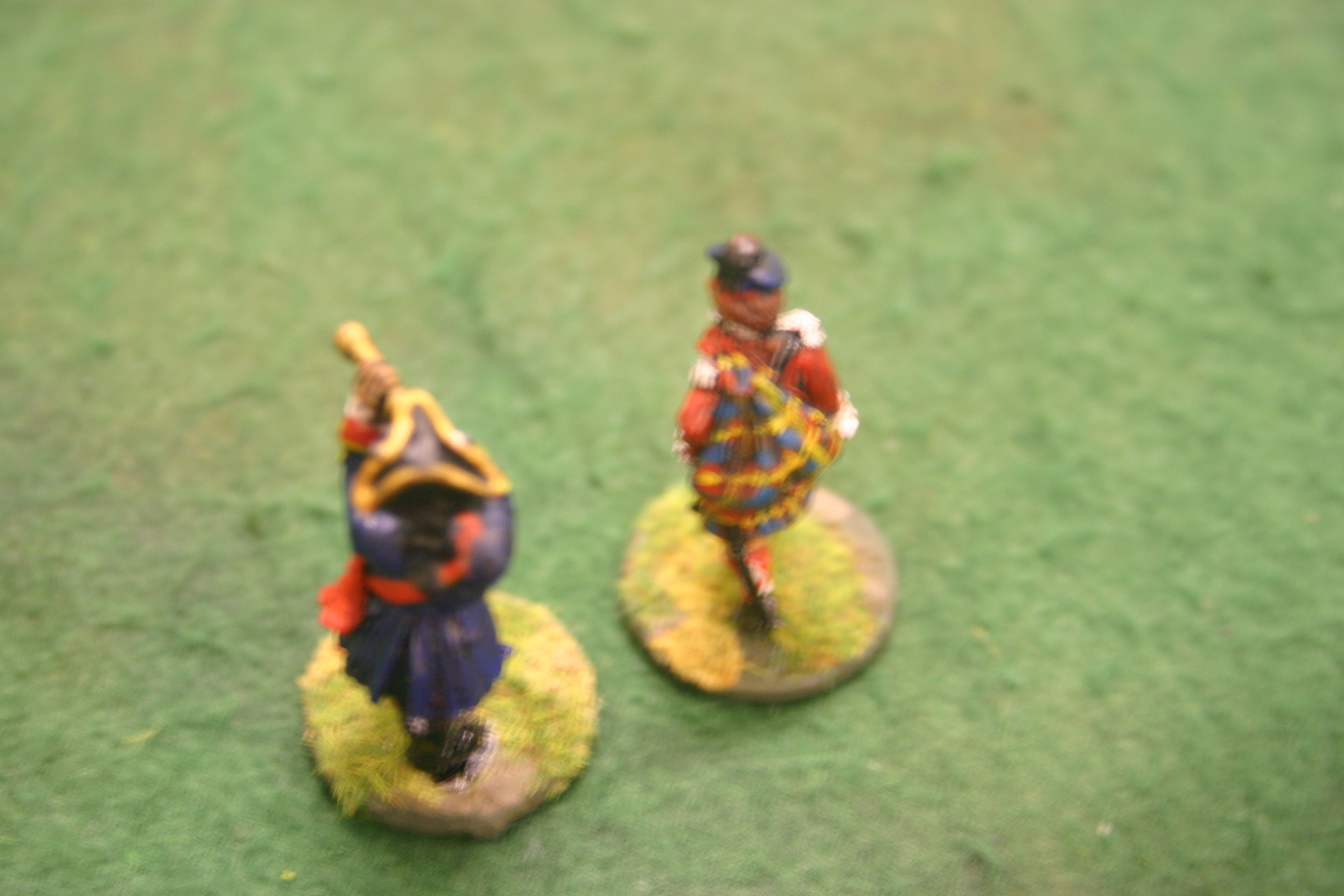 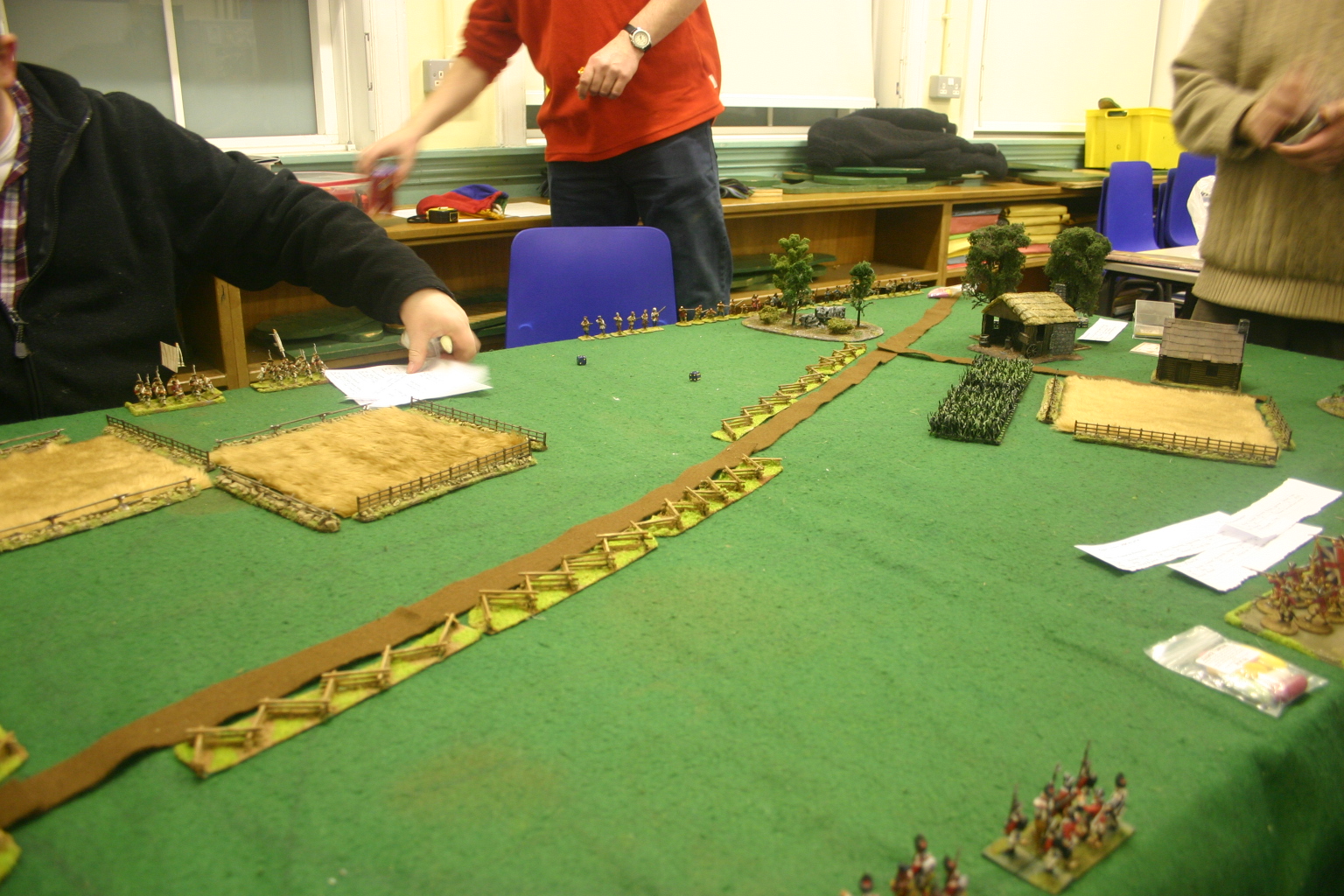 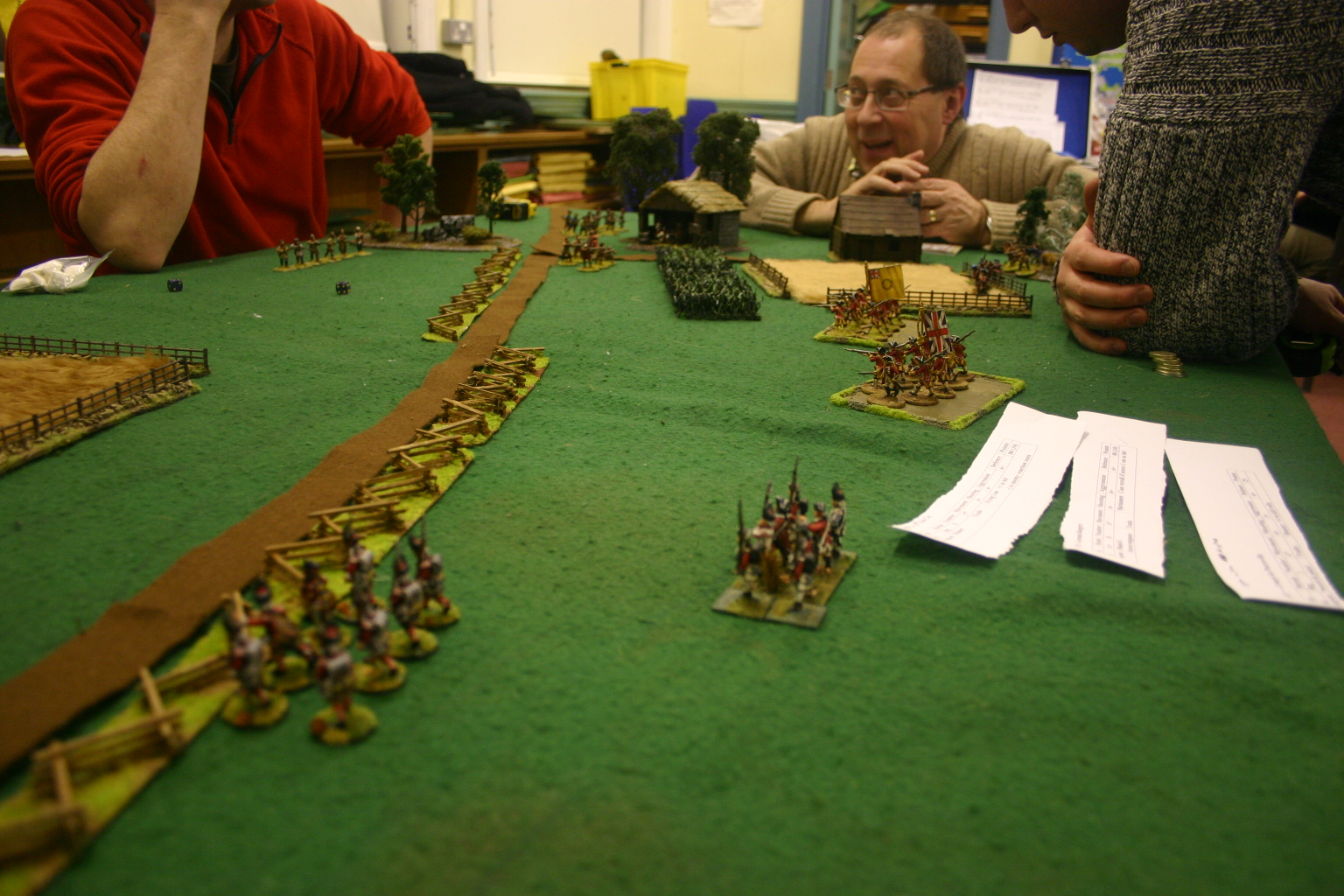 The British advance from right to left. A devastating volley from the Highlanders crippled a French line unit swung the battle for the centre in the British favour. 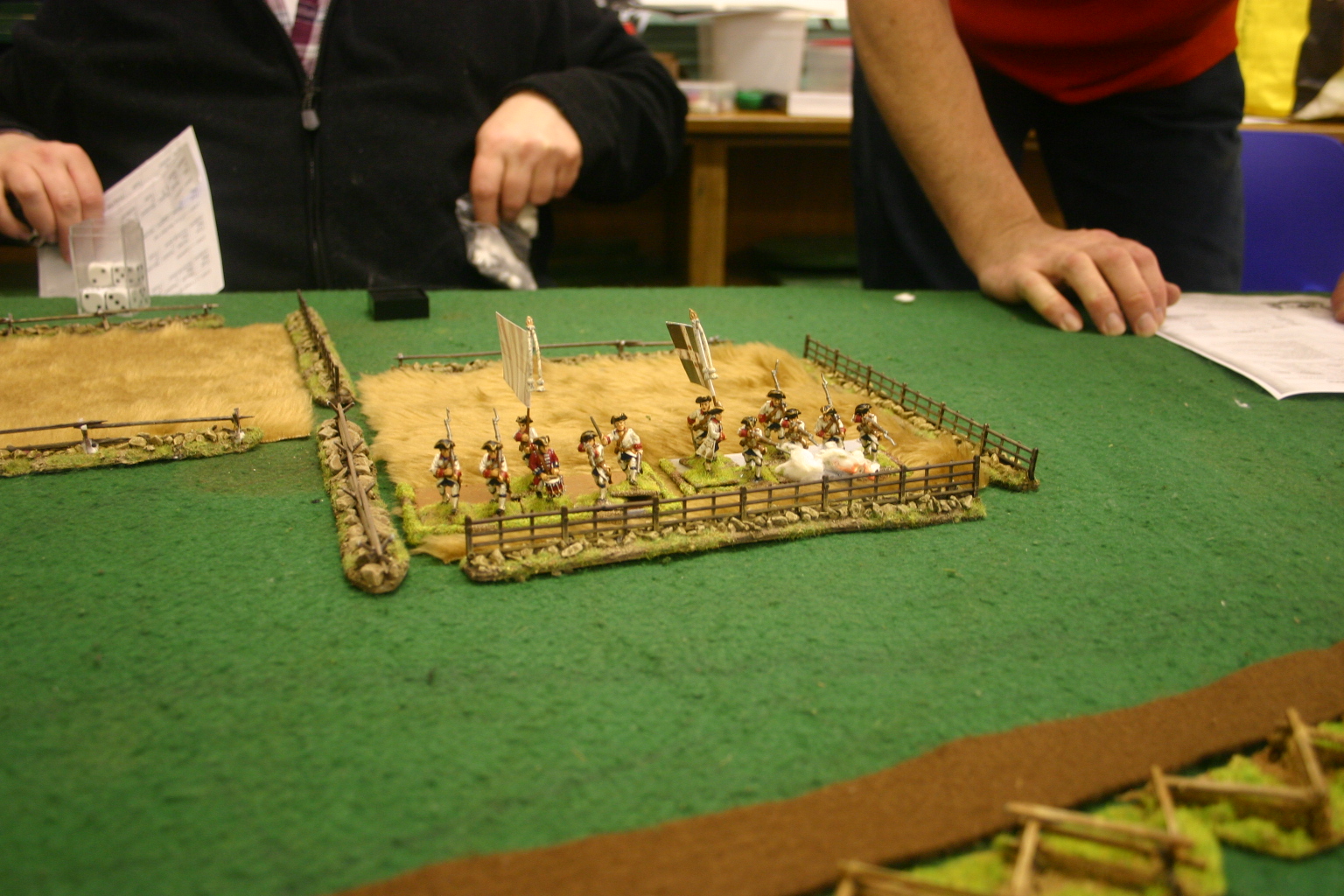 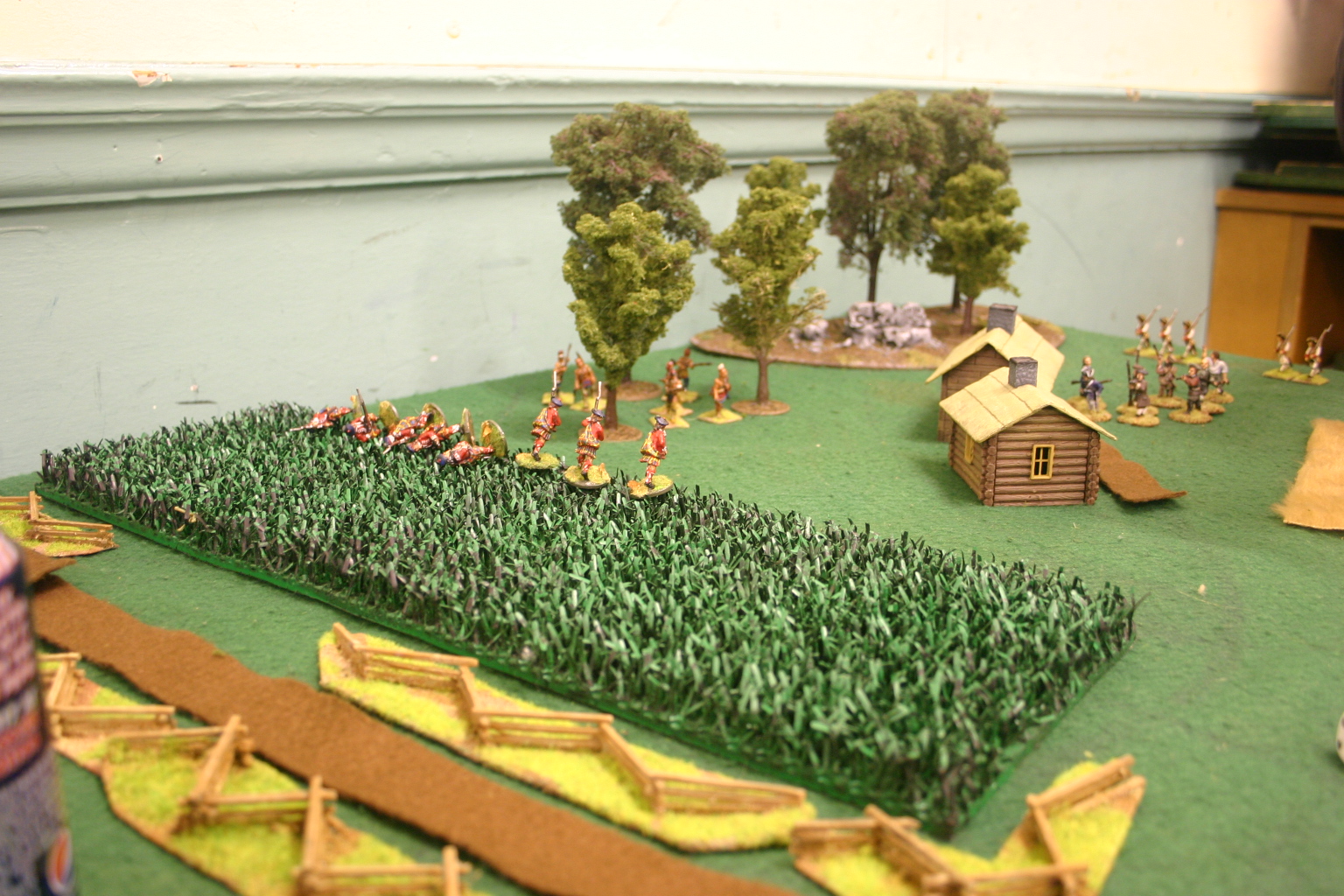 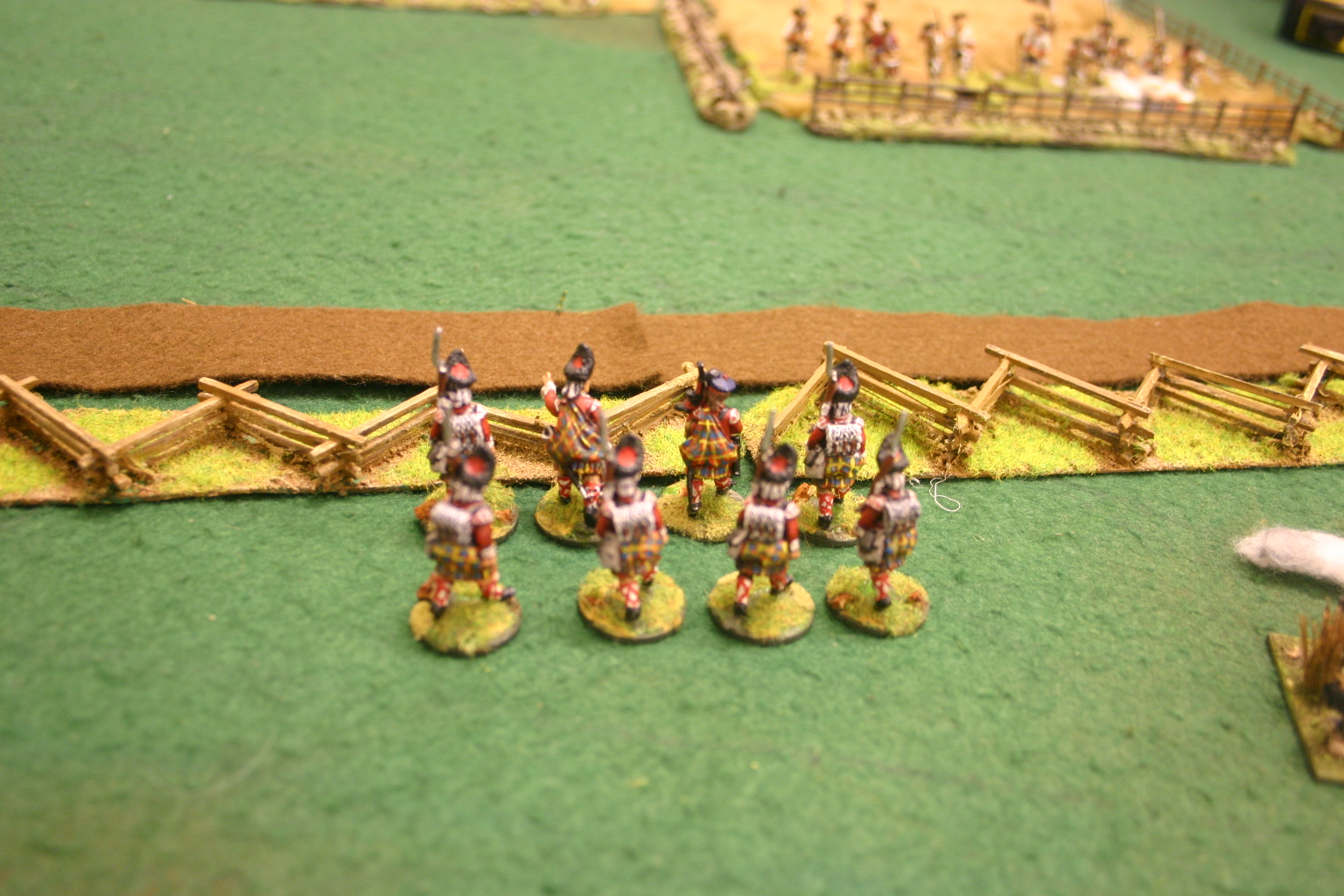 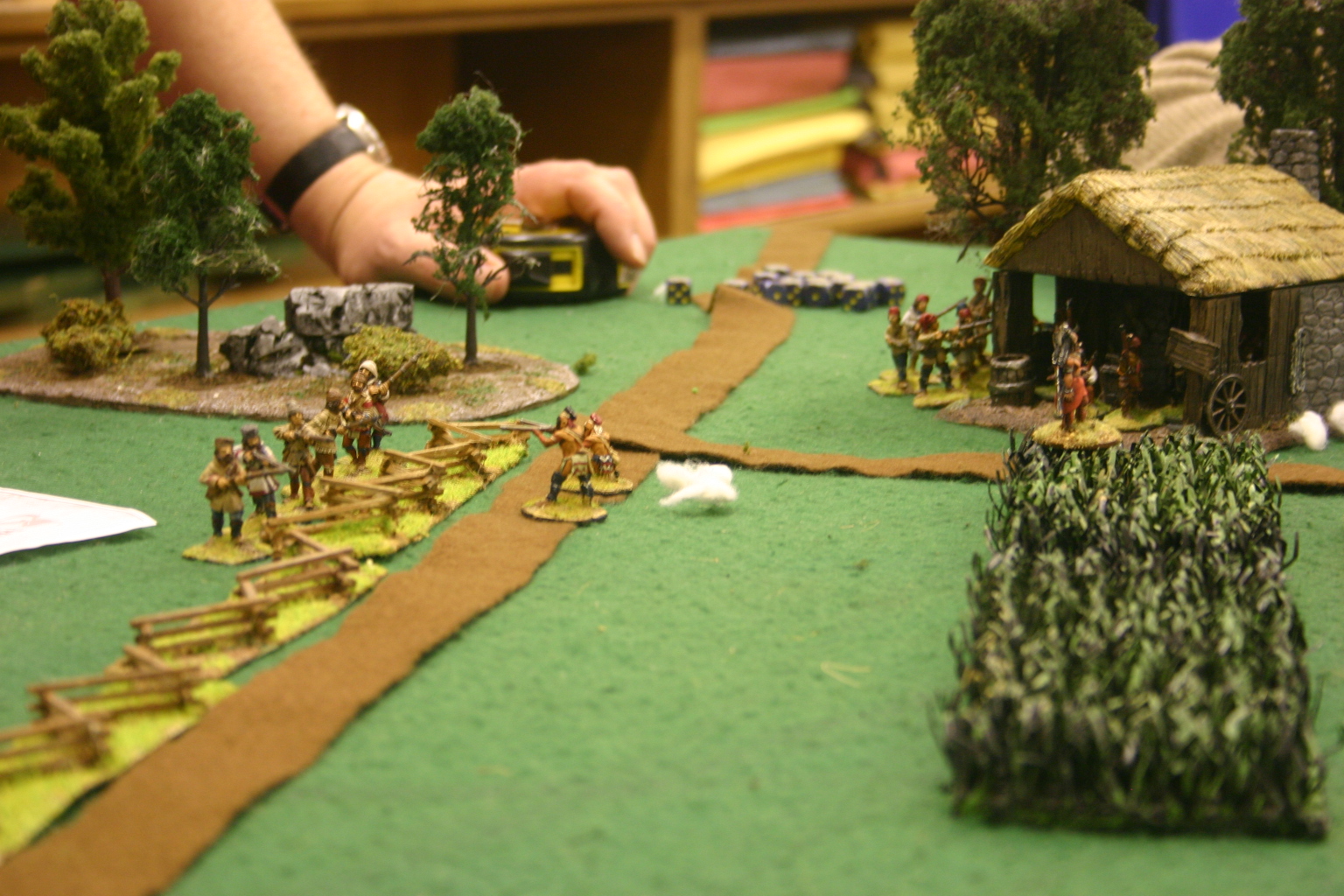 The french Indians and Marines overpower their outnumbered foes on the British right. Their flanking fire helped to stabilise the centre and lead the battle to a bloody draw. 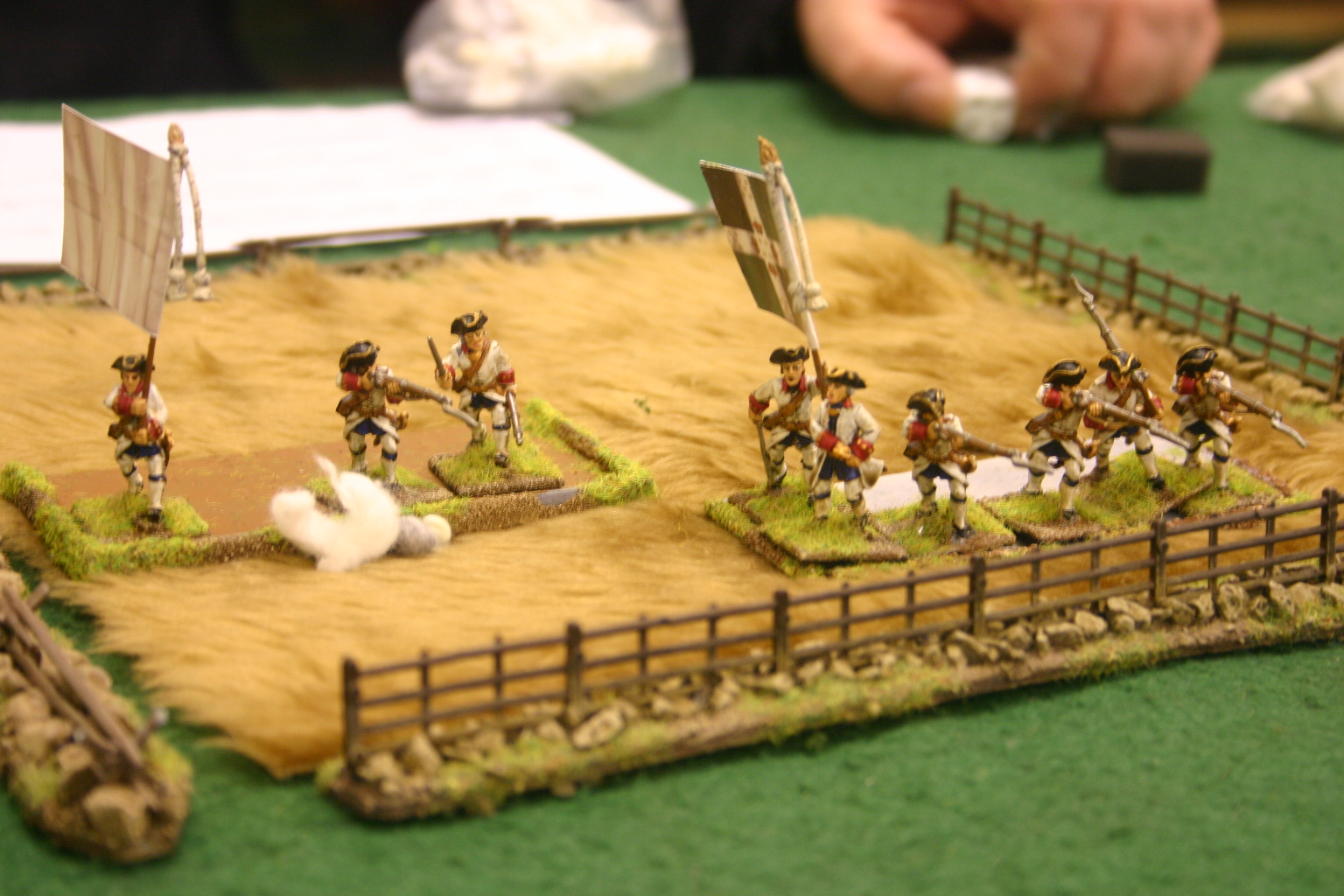 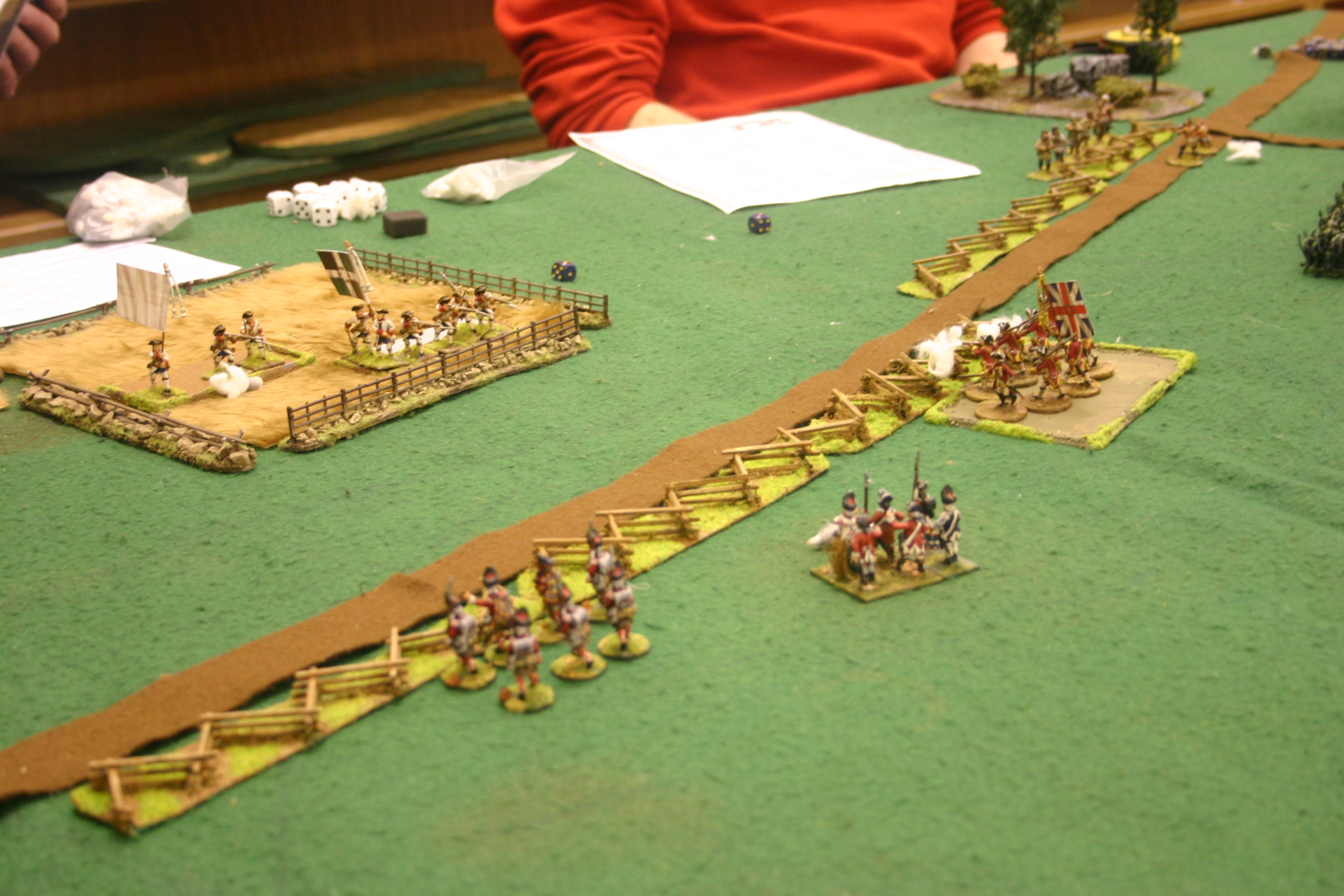 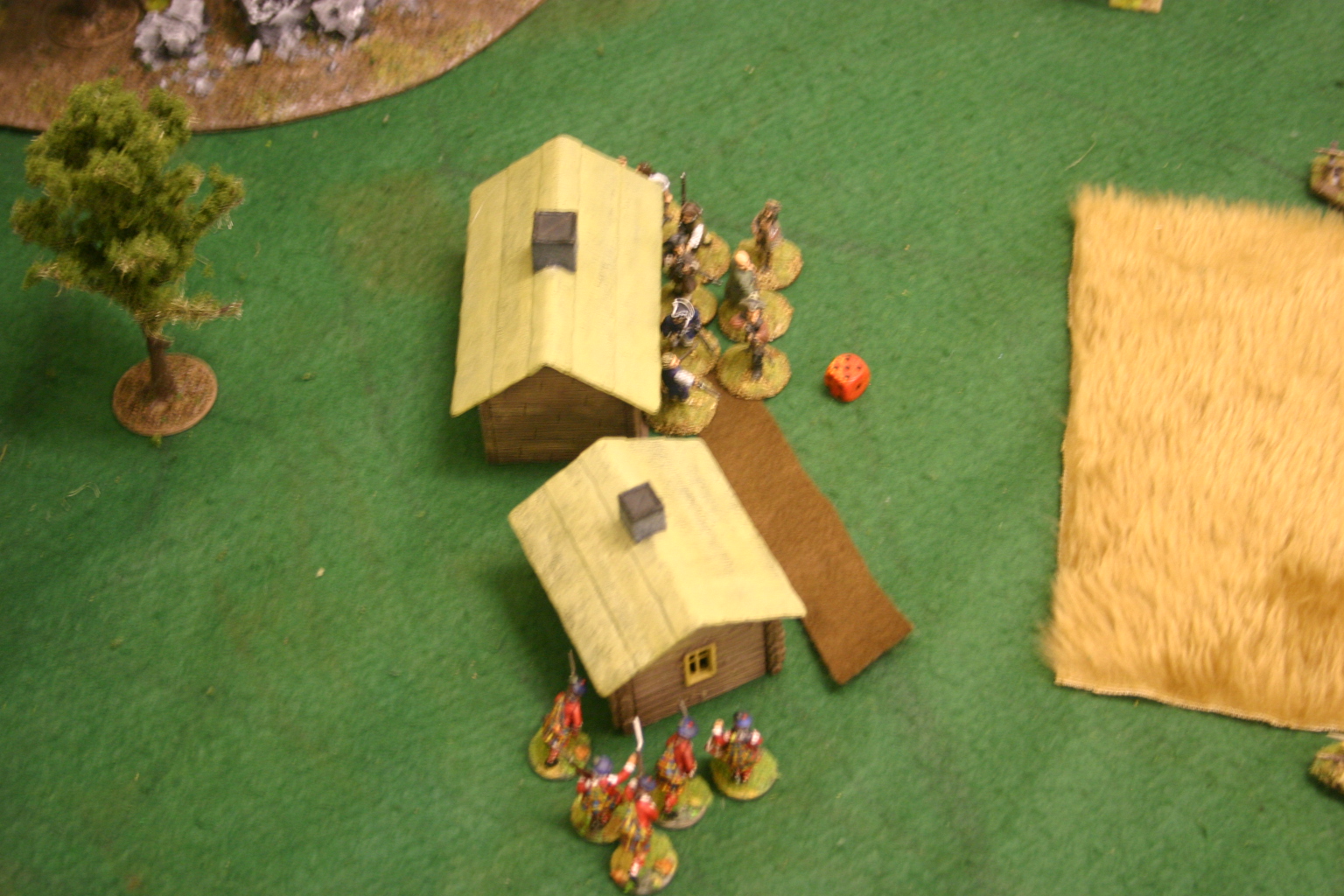 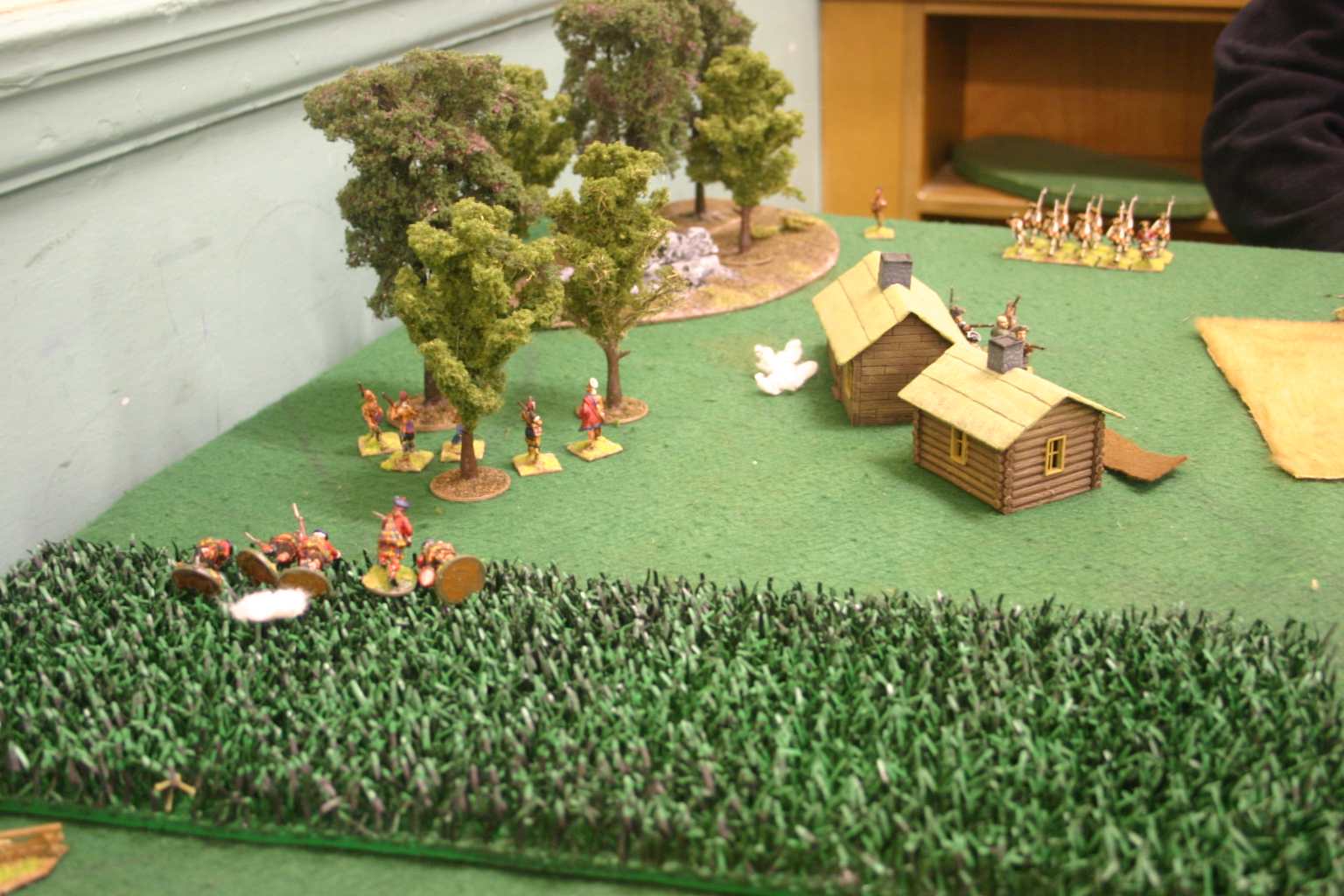 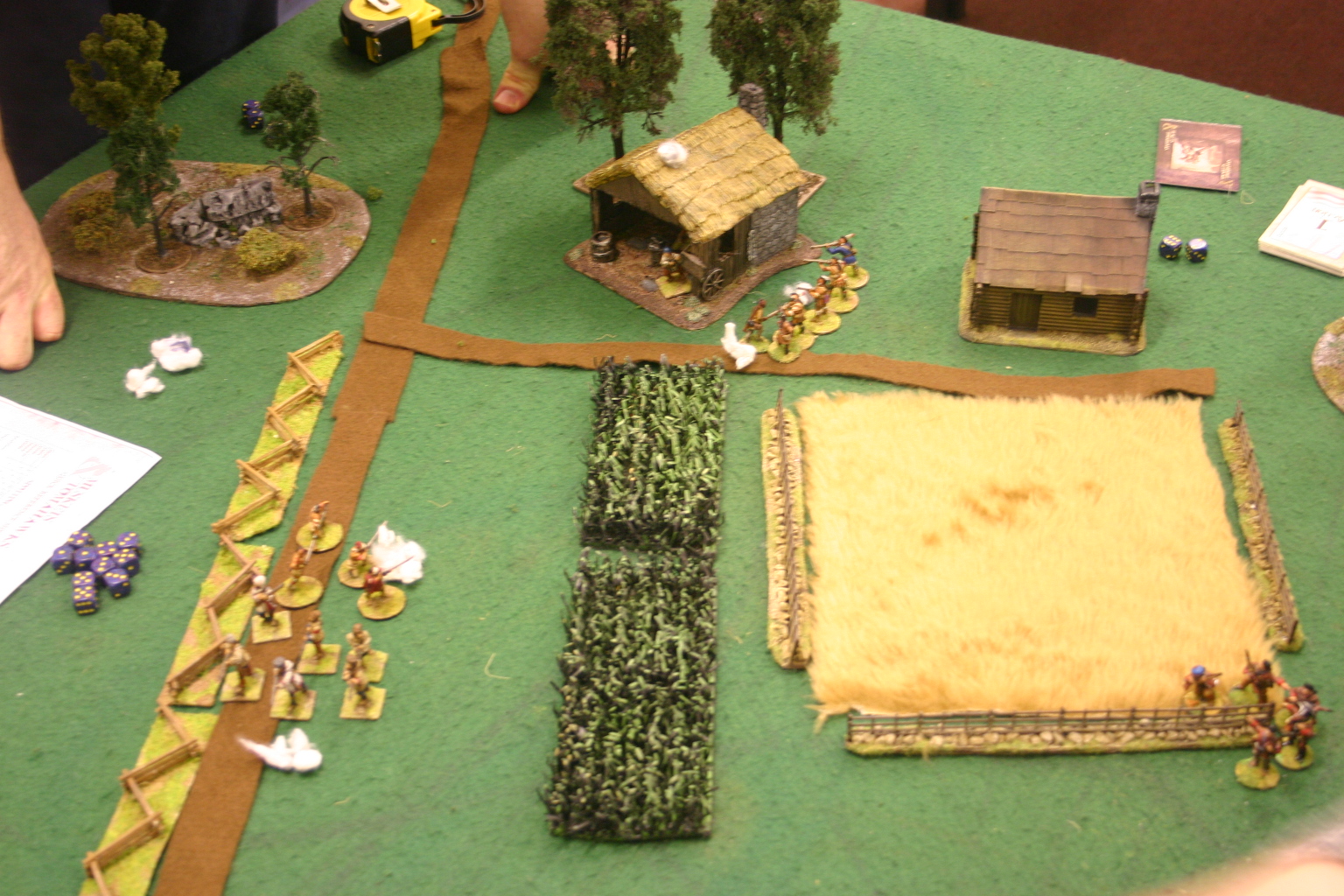 All in all a very enjoyable game - one to try again in the future.
Posted by North West Nerd at 13:43 1 comment:

High Elves take on the Lizardmen 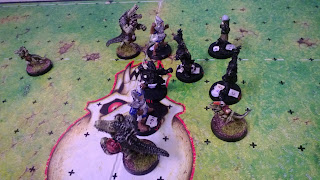 The Lizardmen look absolutely stunning. The High Elves positively drab in comparison - will they ever live it down!

Posted by Lancaster Wargamers at 07:59 No comments:

A Fine game of Muskets and Tomahawks was played last Tuesday 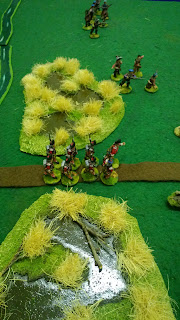 Here some British are marching down a road through some rough ground. 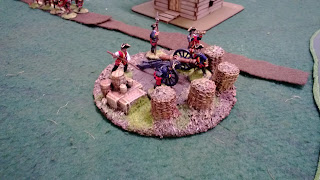 And some artillery trying to hold up the French. These rules are proving pretty popular at the club. In this instance the Frech took a beating.
Posted by Lancaster Wargamers at 07:25 1 comment:

I really recommend you watch this (long) video. It gives a great overview of what promises to be a huge new game system.
Posted by Lancaster Wargamers at 05:00 No comments:

Stalingrad.  We’ve all heard about it and maybe seen some films about it of dubious historical value but entertaining nevertheless.  So, apart from it being so well know, why refight it?  It’s just a slog through an urban Hell, right?

Well, in some ways it is but for both sides it is about nursing resources, organising complicated attacks in a difficult environment and more importantly, the Germans CAN win it but it is very tricky.  As a wargame player, one of the interested for me is in understand the problems WW2 commanders faced and recreating that on the tabletop.  I’ve done this in for Normandy and Kursk and now I wanted to try urban combat.

At the club, we use a mix of Spearhead and Blitzkrieg Commander (BKC), a hybrid of my own construction which we call Spearkrieg.  Spearhead provides the core but we use command rolls to trigger movement and firing and a different Recon system (see link for more on Spearkrieg).  We’ve found that, with a few considered tweaks, we can recreate massive battles/campaigns involving more than half a dozen Divisions that can be played quickly and give historical results.

For Stalingrad, we will be fighting three campaigns.  The first is in the south of the city, the second in the middle and the final one will be in the north around the main factories and set several weeks after the first two campaigns.  The main source for maps, information and the Divisional strengths/TOEs is from the quite frankly superb book, Armageddon in Stalingrad (volume 2) by David M. Glantz and Jonathan M. House.  Glantz is a excellent historian and produces academic texts full of all the stats and maps that we wargamers actually need.  They are a slog to read because of the detail but they are worth it for that detail, particularly for the Soviet side (e.g. division commander biographies are included and numbers men (by weapons) week by week for the divisions in Stalingrad).

The map is based on a German military map I found on the web and seemed to match Soviet ones I found that weren’t as detailed.  I traced onto the map the Spearhead 3” sector squares, railway lines and deep gullies (see South Map).  The Germans had to set-up in the marked areas (or just off table) and the Soviets set-up, dug-in, anywhere 10” or more away from the Germans.
I’m not going to give a blow by blow account of the fighting but here are some maps and pictures showing the re-fight. 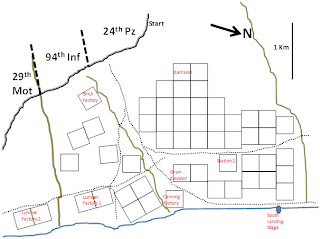 Day 1
We forgot to take any photos but here’s the frontline. 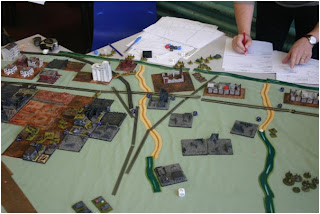 The dice mark the front line (below it are the German positions) and to the left are Soviet infantry that are already known about (i.e. spotted) – there are more Soviets but they haven’t been spotted.
Day 2

The 94th (Saxon) Division infiltrate down the gully and attack the Canning Factory. 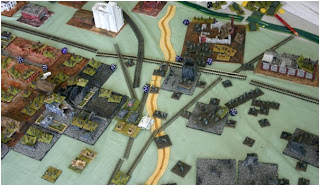 End of day 2 (dice mark frontline).  The 24th Pz Div have made good progress to the left of the picture.  94th Inf Div in the middle and right have pushed into the Canning Factory District but only have a toe-hold.  Of picture the 60th Mot Div are really struggling against the veteran SMG survivors of the 35th Guards.
Day 3


*Note: Soviet units could not break as per Spearhead rules but a platoon that was “killed” could only roll for recovery (on a 6) at the end of the day it was killed – failure meant it was lost for good.  The German units could break and be lost for the battle but their killed platoons could roll for recovery at the end of each day.  Resting German battalions for a day or two to recover was the sensible option!
Posted by Lancaster Wargamers at 07:15 No comments: